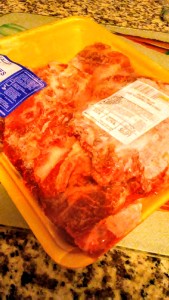 One day a young lady decided to stop by a grocery store. As she made her way to the meat section, she saw a young man placing a meaty package of neckbones in his cart. Before she knew it, she exclaimed, “That’s a lot of meat!” The young man replied, “Yeaaah, and for this price, is a great buy!” Being from the country, she said, “Once upon a time neckbones were a very, very inexpensive meat. You could buy them a dime a dozen, but not now.” He laughingly agreed, and (without invitation) began helping her to find a meaty package of meaty neckbones.

As they continued their neckbone interaction, she was moved to ask him, “Do you go to church?” He said with a quick and definite “No… but, I love God.” The young lady looked puzzled, as if waiting for an explanation. He began expounding his answer by sharing his testimony that while in prison for two years, he accepted Christ as Savior, and Jesus had a good relationship. Now that he’s out, he still maintains that relationship, without attending church. She asked, “Why don’t you go? He replied, “Because I’ve seen a lot of falsehood… people wearing the fancy clothes, lies, and deception in the church.” In defense, she shared, “Not all are like that. We may see all kinds of behaviors on our jobs, but we don’t stop working, do we? We continue.” He then responded, “I know, but we go to work because we have to.” She replied, “That’s a valid point, but I want you to know, we go to church because we love God, and because He said for us to go.” He then answered, but now looking a little convicted, “Yeah, I know…” and continued… “Not forsaking to assemble yourselves together… I know.”

She was not impressed because like some, this young man knew the Word, but looking at other’s behavior had hindered him from assembling “himself” with the church in hearing the Word in obedience to Scripture. To further encourage him she added, “Attending church is not about looking at people’s behavior, but  looking at Jesus and what He did for us.” She continued, “Jesus died to save us from our sins. When we attend church, we take our eyes off man, and look to God.” With that said, she invited him to her church home.

After looking in her purse, she realized she didn’t have her church name and address card, which she tries never to be without. Then she asked, “Do you mind if I write the church address on a receipt?” He excitedly said, “No, certainly not.” As she handed him the receipt, he said he was going to come to church. Smiling as they parted ways, she placed in her cart that big package of meaty neckbones he had helped her pick out, all the while thinking, “it’s not about neckbones. It’s about Jesus. Then she joyfully continued her shopping.

“And he said to them, “Go into all the world and proclaim the gospel to the whole creation” (Mark 16:15 ESV).

I will keep on thanking God for every opportunity to witness for Him.  By Hertistine Washington/keeponthanking.com